For those who play penny auctions, perhaps the biggest factor in deciding which penny auction site(s) to play, are the products each site offers. If you are looking to win name branded products, including electronics from Apple, Samsung, Garmin, and Sony, QuiBids might be your penny auction choice.

Those who want quality off-branded products (with lots of daily auctions!) might choose to play on DealDash. And bidders who like lots of gift card auctions, HappyBidday or PrimaBids may be their penny auction of choice. Well, what about firearms? Yeah, the mere mention of this word can elicit strong emotions. This article is going to steer clear of the politics, and focus on those individuals who are looking for an awesome penny auction site that is dedicated to firearms, ammunition, and accessories. This penny auction site is Bidgunner.com

Whether you’re a hunter, sportsman, collector, or want added protection, great deals on guns, rifles, ammunition, cases, etc., can be had at Bidgunner.com. While PrimaBids also a few auctions of firearms, Bidgunner, as the name suggests, has built its entire brand around firearms and have been in business for many years. While Bidgunner also auctions gift cards, including Amazon and Lowe’s, if you want to compete for brand named firearms, such as Remington, Colt, and Smith & Wesson, Bidgunner is a penny auction website you must visit.

Watch how easy Bidgunner is:

Bidgunner.com is the premiere penny auction for Guns and Ammo and Outdoor Gear at the lowest prices on the internet. Since their launch in 2012, Bidgunner.com has shipped over 30,000 guns to bidders all across the country. There are no loopholes here; all firearms are shipped to a local firearms dealer where you can complete the background check and pick up your guns. Its literally that easy. 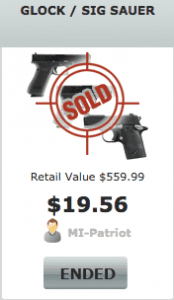 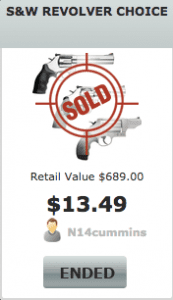 Where In The World Is Madbid?
Scroll to top